It’s the first time I write in English on this blog. This post is a translation and adaptation of the first part of my French Japan Expo 2019 report concerning miraiskirt. This time, with this language, I want to share more widely my feelings. Thank you for reading (and sorry in advance for my poor English skills).

Those who are already following me on this blog or on Twitter may know miraiskirt, ミ ラ イ ス カ ー ト. If not, it’s the artist name of Marina Kojima (児 島 真理 奈), an idol usually called Mari-chan by her fans, who had already come to Japan Expo last year. I have really been taken by this idol coming from Kyoto, by her smile and warm kindness.

For Japan Expo 2019 (4-7 July), I was especially waiting for one news: the comeback announcement of miraiskirt in France. The truth was I already knew it was sure since many weeks, but the formalization of the news by Saiko!Japan arrived very late. Mari-chan will be back at Paris! (or… at Villepinte if you prefer) This great news justified itself my presence at Japan Expo.

Last year, I went to Japan Expo only two days and I knew very little about miraiskirt. I had collected before some information on internet and watched music videos on YouTube. However, this year, it was completely different! I was at Japan Expo for the whole four days, with a special entrance ticket in order to make as many activities as possible and, of course, to be present at every show of Mari-chan, wearing my miraiskirt T-shirt and towel bought last year. I was ready! 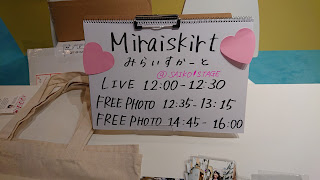 She appeared on the Saiko!stage every day, around 12pm or 1pm to perform her main songs for half an hour (with different setlists), beautiful and lovely melodic and dancing pop songs that work so well. We could also meet her during daily photo and dedications sessions. I was obviously assiduous at each of her appearances, even if I had to run through all the huge exhibition halls (this Japan Expo was certainly great, but physically exhausting~).
There were always a lot of people at her showcases, so I was happy for Mari-chan. Many people wanted to take a photo with her or a cheki which she signed each time with a generous smile. Even the goodies were also bought quickly (except the bags maybe~).

A stage like the Saiko!Stage (imitated by the new Tsubamé stage) is perfect for an artist like Mari-chan. By its size and its accessibility, the proximity and the interaction with public are quite better. Curious people, wondering who is singing, easily come listening to her. Then, the music and the charm of Mari-chan can finally convince them.

Mari-chan has not changed, she is still so smiling, sunny, passionate and receptive. This year, the main difference came from the public: some people (including me) already knew her, and the reception was warm (even upon arrival at the airport!). Many "wota" and "miraccho" were in the public each time to participate with this enthusiasm that brings so much to the good atmosphere of idols concerts. I did my best too (even if I don’t know all the calls and dances yet). I am really pleased by this hearty welcome during the whole four days, she deserves it so much. The last day, I also enjoy to see some children with their parents coming right in front of the stage. Mari-chan has certainly won the hearts of new fans this year.
Anyway, how could anyone not succumb to her beautiful smile?

Personally, I was particularly touched by the gift (photo at right) she offered me the first day to thank me for following her regularly for a year on various social networks and platforms like Twitter and Showroom. This photo with her message written behind really moved me. In fact, I did not expect it at this time when she came toward me. I had no doubt about her kindness but, on the stroke of surprise, I didn’t know how to respond... Sorry Mari-chan. I blame myself not to have been able to tell her what I wanted to say (my skills in Japanese don’t help...). In any case, this nice present really touched me and reinforced my desire -already very strong- to support her in her artist life and in her projects.

During this first day, with a group of idol fans, we also had dinner with her at night in Paris, at the Champs Elysées. It was a really enjoyable moment, as well as the one, then, in front of the Arc de Triomphe all together, talking and taking pictures in a communicative cheerfulness. So many beautiful memories for me.

Mari-chan speaks also English. That makes it easier for me to discuss with her. However, this year, the frustration of not being able to speak even a little in Japanese has been great... Another language that I must learn for work clutters completely my brain. Because of this, it prevents me from speaking with my few knowledges in Japanese (and sometimes also English)... I have to overcome this frustration to say what I am able in Japanese, or at least a little better than today. My objective is not to become a fluently Japanese speaker, but to be able to exchange easier.

For a funny anecdote, I was lifted for the first time during the last showcase of sunday. To be lifted that way without expecting, it was quite surprising. "Uuh, what's going on?"~ But it was fun! Thank you Sébastien! Thanks to this Japan Expo, I met also this year the community of French idol fans and shared with them good moments; thank you all.

In parallel, I talk also now on Twitter with some Japanese miraiskirt fans/"miraccho", especially the nice JT and ぁ ひ ゃ ぁ who really wanted France to love miraiskirt too. I think we can conclude on "mission accomplished".

I could say a lot about miraiskirt. If you didn’t know her yet, I hope you want now to discover Mari-chan’s world. I left Japan Expo 2018 as a new fan of miraiskirt. This year (attention, I acquired vocabularies~), I "ensei" towards Japan Expo 2019 as "miraccho", and, finally I left the convention more convinced than ever: Mari-chan is the best!

If you want to see nice photos (clearly nicer than mine~) of the beautiful Marina at Japan Expo 2019, I strongly recommend you to check the twitter page of Bonjour Idol (a French/English media about  Japanese idols) where you can find many superb photos as well as videos (also for Task Have Fun and We=Mukashibanashi who were also at Japan Expo). Moreover, if you support them on Patreon, you could enjoy more exclusive photos of miraiskirt (and more)! ;D

It’s now time to conclude this report. The four days passed so quickly. I'm sad because it's finished, because Mari-chan went back to Japan, but I also very happy. This edition of Japan Expo was very memorable for me, in particular thanks to Mari-chan.
She expressed her wish to come back next year in France. I hope so too, of course! And I will "ensei" again for sure. For now, however, I especially want to support her, to wish her success and happiness in her dreams and projects. To celebrate the 5th anniversary of miraiskirt, she has launched a call to recruit new members. So there may have changes in the future. Anyway, I will support her, I will support miraiskirt. Lastly, I hope… no, I will also “ensei” to Japan next year to see a live of miraiskirt at Kyoto, in Japan.
Thank you very much Mari-chan for these four days! Many deep and sincere thanks! 本当にありがとうございました まりちゃん!! ミラ~
Publié par ZGMF Balmung à 23:30 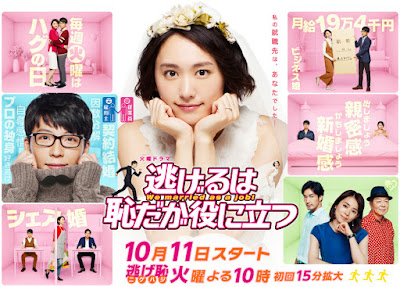